as told to Shadow Wolf, Spirit Wolf, and Nightwind

As you walk or ride through wooded areas, down one dirt road and then another, you can FEEL them. Oh you might SEE a branch or a bush move, a shadow under the pines, or HEAR an unfamiliar sound, but mostly you just SENSE they are there as you make your way through the woods.

They are the Spirits of all those that have been cast out by the humans who could not, or would not, care for them. They are 100,000 and more strong, and that is what they wish to be called - the 100,000 plus Pack.

They are resting, waiting for the time when humans will recognize that they do not exist as what they wished or as the Creator intended them to - as wolves. They have found a form of peace in the hills and the valleys where few dwell. They sing the songs of their ancestors. And they may come to those who wish to see them, whose hearts are truly full of love for them. They will touch your soul if you choose to let them.

The dog Spirit is gone now, they are now entirely Spirit of WOLF. They are what they should have been before those of you who thought it was wise, crossed them with the dog and made them society's outcasts.

They choose now that their story be told.

Those of you that breed have done them an injustice by trying to tame them. Their Spirit is meant to roam, to be free to run and hunt and play, and to breed when their time has come, not when you choose. They understand that you, the breeders and the owners, find them to be beautiful and mystical creatures.

They beg that you allow them be the beautiful and mystical creatures they were meant to be, where they belong - in the wild. They remain hopeful that you will do your part to achieve that goal; rather than make them captives so that you may enjoy their beauty, their Spirit. They suggest you take a lesson from the Native People, learn to walk with them, although your concrete forests do not often allow for this.

Go to the woods and forests, experience them in their chosen habitat - with love, not from self-centered motives... And if you don't see them or at least sense them, ask yourself why. Look deep into your heart........ What is it you REALLY want?

Realize that the pens you build, hold them only because they allow it, only because you have bred them to be what YOU want them to be, not what they were intended to be. Why do you think they want to escape those confines? Pens and chains and beatings can only truly affect their bodies. Realize that by breeding captives, you are trying to destroy their true identity/Spirit.

They wish you to know that when you create rescue facilities because they are thrown away, they appreciate your efforts. But they are sometimes just as abused and neglected in these places. They live out their lives in cages, no matter what you choose to call them, they ARE cages.

In the wild they form their own packs, their own families. When you hold them in pens you form their packs, find their mates - your choices are seldom good ones. They want you to know that many that are in rescues have chosen to leave their physical bodies and roam as Spirits. This is why so many are unmanageable, so fearful.

In some "rescue" facilities they are beaten, starved, neglected, and bred. Yes, "rescues" sometimes use them for new breeding stock. There are also some very good rescue facilities, but still they are penned. Even three or four acre pens do not allow them room to truly stretch their legs or exercise their passions. They DO appreciate the efforts of rescuers....... And they ask that instead of ANYONE breeding, or supporting a breeder by buying a pup you choose to help the ones that already exist.

And so the Spirit Pack grows. It chooses to be called 100,000 plus Pack. We have seen them, and there are many, many more than that.

They suggest that instead of working so hard to rescue all, and collecting more than you can possibly care for, that you let some go. Physical death is often a better alternative for them than an overcrowded pen, or a chain. They ask that when you DO choose to keep them, that you love them, and give them your time, and real care, not just food and shelter. And let them BE the WOLF that you thought you wanted.

They ask that you promote efforts to keep the Spirit of WOLF in the wild.

They ask that you do not change their names to disguise their heritage to promote sales, or to "hide" them from the authorities. They are wolves, and when crossed with dogs they are wolfdogs! 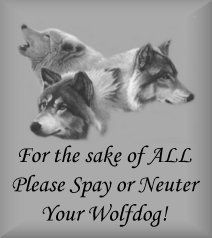